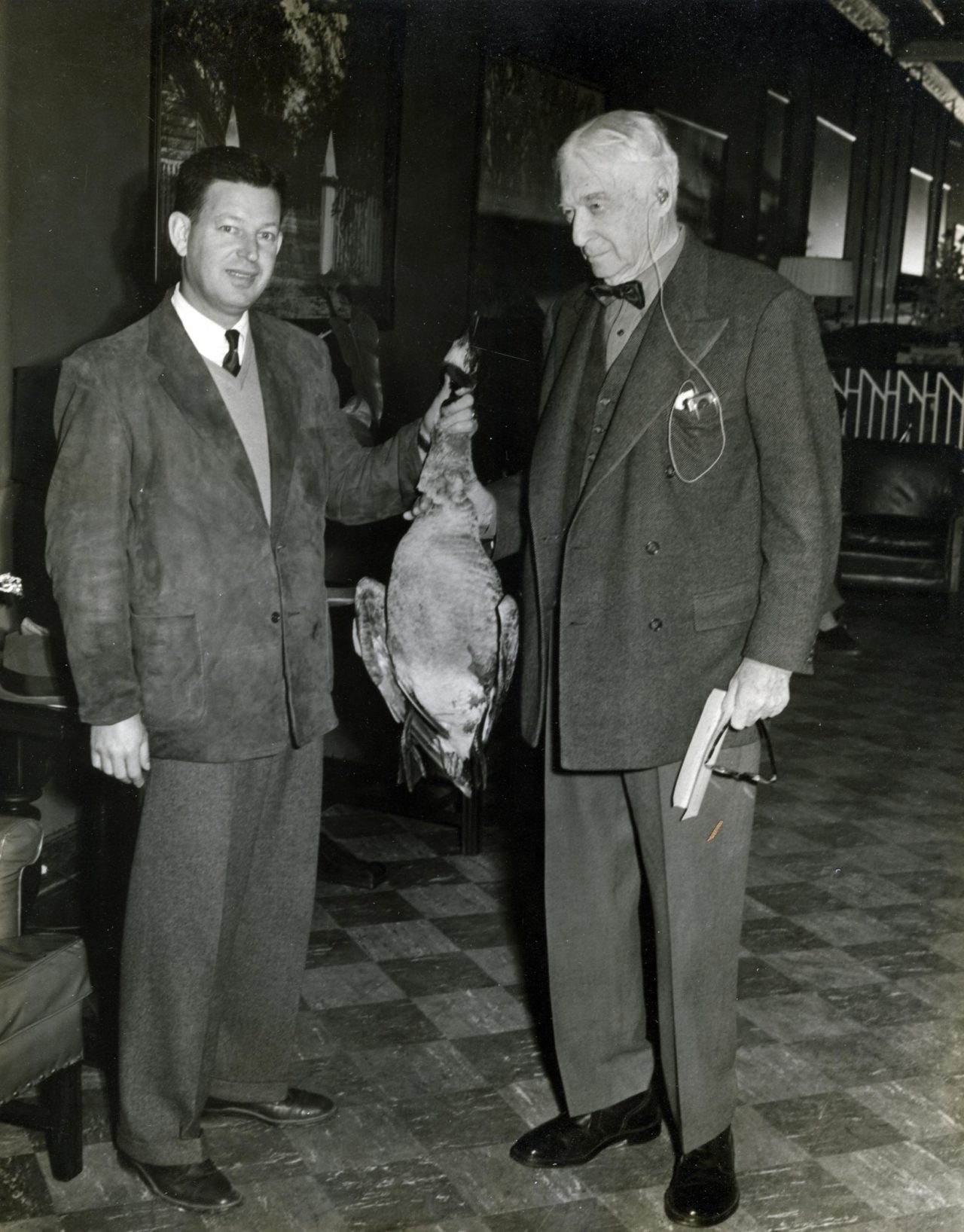 The Fogels of Front Street

Abe Fogel (l) with Bernard Baruch in the lobby of the Prince George Hotel. Photo by W.H. Burney of Georgetown. Courtesy of George Fogel.

The history of the Fogel family in Georgetown, South Carolina, begins with Harry Fogel, who emigrated in 1900 from the Austro-Hungarian province Galicia in what is today’s Poland. By 1904 Harry was in Georgetown operating a dry goods business. The woman who would become his wife, Clara Hepler, emigrated from Odessa, Russia, in 1905, arriving first in Charleston, South Carolina, where her family was in the jewelry business. On November 19, 1908, a small blurb in Georgetown’s Daily Item noted: “Mr. Harry Fogel, a young dry goods merchant of this city, is in Charleston, and will be married this evening at 8 o’clock to Miss Clara Hepler of that city. Accept the Daily Item’s congratulations, Harry.”

By 1920 Harry and Clara had three children: Beatrice, age ten; Abraham, age six; and Ruby, age four. Interestingly, the census also reports living in the home one Isadora Hufflin, age 22, who had emigrated from Austria in 1910. 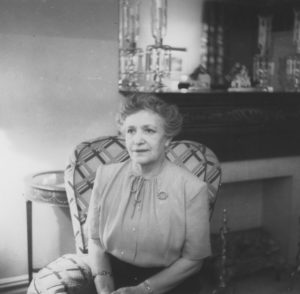 The Fogel family store occupied three different locations during its years on Front Street, and by the 1930s had moved to the 800 block in the front of the Standard Opera House. The Opera House had been built in 1894 after a fire destroyed part of the downtown area. In 1932 the building burned to the ground and Harry lost everything; however, he was able to buy the land and erect a new building that housed the clothing store and the Lafayette Hotel. From 22 rooms, the hotel, renamed Prince George Hotel, was expanded in 1950 to 50 rooms in a renovation that added a third floor and the original River Room Restaurant.

The 1940 census recorded Harry, Clara, their children—now young adults—and Bea’s husband, Fred, all living in a house on Broad Street. All family members were employed by the store and hotel. Fred was from the Bronx, New York, and had arrived in Georgetown about 1935.

According to the census, Harry had a fifth-grade education and Clara had completed seventh grade, but their offspring outstripped them in schooling. Abraham and Ruby both graduated from college, while sister Bea had two years of college to her credit. Abe attended The Citadel in Charleston, but transferred to University of South Carolina when he broke his leg in his junior year and was not able to drill with his class. He graduated from USC in 1935; Ruby graduated from Duke University, where she was voted class poet; and Bea attended Brenau College in Gainesville, Georgia, graduating in 1929.

Below: Abe Fogel and his father Harry, dockside in California. Courtesy of George Fogel. 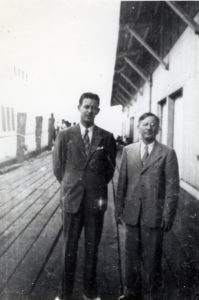 Abe had joined the U.S. Navy in the late 1930s and was on active duty with Fleet Air Wing 8 when the United States declared war in 1941. He told of being shipped to Pearl Harbor in the first convoy, arriving a few days after the attack, only to have his group ordered back to California. He served the rest of the war in the Pacific Theater, primarily in New Guinea and the Philippines. Harry Fogel’s relatives in Europe all were killed by the Nazis, except for one cousin who survived and later moved to Palestine. Harry himself did not outlive the war. He died on April 28, 1943, soon after learning of his sister’s death. Ruby and Abe both said that he died of a broken heart.

Beatrice and Fred managed the store during the war years. Afterwards the family reaped the benefit of Georgetown’s bountiful postwar economy, fueled in part by the opening of International Paper’s Kraft Paper Mill—the largest in the world—in 1936.

On March 29, 1941, Abe married Elizabeth (Bette) Rose Greenwald from Baltimore. Their eldest son, Harry Robert Fogel (Tad), was born on May 4, 1944—Abe met him for the first time when Tad was 18 months old. Mustering out of active duty in Boston, Massachusetts, in 1945, Abe returned to Georgetown but remained in the navy reserves and sometime in the 1950s attained the rank of full commander.

Ruby enrolled in graduate school at Columbia University and was a copy writer in New York when she met Jack Levkoff, who worked as a controller at Macy’s. Their two Jewish mothers in Georgetown had set them up: Ruby’s mother, Clara, planned it with Jack’s mother, Sophie, who had moved to Georgetown after the death of her husband, Lazarus Levkoff, to be near her daughter Dorothy (Dot) Levkoff Schneider (Mrs. Phillip Schneider). With their children both in New York City, the mothers conspired with some cousins to arrange a blind date! Ruby and Jack were married in 1947.

Ruby continued her writing career with some acclaim. A collection of her poetry titled Of Apes and Angels was nominated for a Pulitzer Prize in 1966, and two years later one of her poems received the James Joyce Award from the Poetry Society of America.

Jack and Ruby’s two daughters, Lizabeth and Mary, were born in Miami Beach: Jack’s career in retailing and later in financial analysis had taken the couple first to Birmingham, Alabama, and then to Florida. The family returned to visit Georgetown over the years, their trips immortalized in Ruby’s poem “Perhaps Some History.” Ruby inherited Harry’s store building at the corner of Front and Broad, which was rebuilt in a low, modern style after a devastating fire. Her daughters eventually sold the property, along with the house on Broad Street where Ruby was born. Bea had inherited the Fogels’ larger house on Prince Street.

Ruby’s daughters would enjoy success: Liz with remarkable innovations in real estate that enabled her to retire at the age of 40 and fulfill her dream of living in Jerusalem, and Mary in the world of museums. A specialist in French Renaissance art, Mary Levkoff also wrote books on Auguste Rodin and William Randolph Hearst. In 2014 she left her job as sculpture and decorative arts department head at the National Gallery of Art to become museum director of the Hearst Castle in San Simeon, California.

Bette and Abe’s son Tad was interested in radio broadcasting from an early age. He worked at the local station WGTN and, after attending the University of South Carolina, moved to Miami and worked in radio there until later returning to Georgetown. He and Abe purchased local station WGOO and went on the air on May 1, 1967, having changed the call sign to WINH. In September 1971, keeping up with the times, they added an FM station. Tad was elected president of the South Carolina Broadcaster’s Association (1973–74) and in 2001 was inducted into the Broadcaster’s Hall of Fame. The stations were sold in 1984. Tad now lives in Brevard, North Carolina; he has four daughters, one in Virginia, one in Texas, and two in Columbia, South Carolina.

Born in 1955, I was Bette and Abe’s second son. Growing up I worked in the store and assumed management in the late 1970s. In the mid ’80s the family decided it was time to close the business. Competition from outlet stores in Myrtle Beach, a general economic downturn, and changes in regional and national market conditions eroded the viability of small retailers, even before the advent of online shopping. Today there are few family-owned department stores in the South.

I switched careers: at 42 years old, I became a freshman at Coastal Carolina, then earned a master’s degree in counseling at Webster University and started work as a mental health therapist—the only Fogel remaining in Georgetown to this day. My wife and I have four children, a daughter who is a veterinarian, a daughter in the master’s program of social work at USC, a son in retail management in Summerville, and a son in the hospitality industry in Washington State.