Max and Trude Heller: Giving Back to Greenville

I left Greenville, South Carolina, more than 50 years ago, but every time the airplane touches down there, I feel like I’m home. I like to drive through the old neighborhood past our house, situated a few blocks from our synagogue, Congregation Beth Israel. Our house was a gathering place for people of all ages, interests, ideas, and cultures. Mom and Dad hosted dinners that were famous for Mom’s food and my parents’ hospitality. Many agreements and friendships were forged at our dining table. Mom and Dad encouraged me, my sister, and my brother to invite friends over. We always had a houseful!

Max and Trude Heller began their married life on August 2, 1942, in downtown Greenville. The rabbi from Congregation Beth Israel conducted the ceremony on a sweltering summer day at Ensor’s on Main Street, the only air-conditioned restaurant in the city. The air conditioning broke, but their marriage lasted 69 years.

The romance began five years earlier at a summer resort outside of Vienna, Austria. Max was 17 and Trude was 14. The day they met he declared his love and said he would marry her someday. According to Trude, “He always kept his word.”

That same week, for a reason Max could never understand, he decided to take the train back to Vienna for a night. He met up with a friend and they agreed to go dancing. They spotted a table of young American women on a graduation trip to Europe. Max asked one of them, a girl from Greenville named Mary Mills, to dance, and the next day he took her for a walk around Vienna. They communicated using his newly-purchased English/German dictionary. 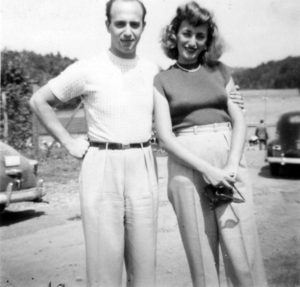 They exchanged addresses. Less than a year later, as Hitler was closing in on Austria, Max wrote to Mary requesting help. She brought his letter to Shepard Saltzman, owner of Piedmont Shirt Company, and asked him to sponsor Max’s immigration to the United States. Saltzman replied, “How can I, a Jew, refuse, when you, a Christian, is asking?” Max Heller arrived in Greenville a few months later and began working at Saltzman’s shirt factory the very same day. For the rest of his life Max would call Mary Mills his “angel.”

While Max Heller was working at Shepard Saltzman’s shirt factory, Trude was in the middle of a harrowing flight from Vienna. First, her father was taken away, leaving young Trude in charge of escaping the chaos in Europe with her mother. Then, after many attempts and close calls, they crossed the border from Germany to Belgium. A year and a half later they arrived in New York.

From the time Max emigrated in 1938, he and Trude had kept in touch as circumstances allowed. In 1940 Max decided to take the bus to New York to visit her. He arrived at her door at the same moment a Western Union man delivered a telegram from Trude’s father that read, “I am alive.” Since then, Trude proclaims my father to be her good luck charm.

Max convinced Trude and her mother to pay a visit to Greenville. After picking them up at the train station, he drove around the town three times to convince them it was a big city. Little did they imagine that 29 years later, Max would begin his first day of eight years as Greenville’s mayor. My parents embraced their adopted hometown and played an important role in helping transform it into a city considered one of the best places to live in America. They did it side by side, as true partners.

At age 42 my father sold his successful shirt business and decided to devote his time to the community. He was persuaded to run for city council and had served two years, when, on a vacation in Florida, Max and Trude read in the Greenville News that Daddy was going to run for mayor. That was news to them!

My father credited Greenville with giving him a new life. In return, working with other forward-thinking people, he gave Greenville new life. Between 1971 and ’79, during his tenure as mayor, his first hire was an African-American woman—the first in City Hall. He saw to it that affordable housing was built; diversity in municipal departments was achieved; community centers and senior housing were established; pensions for policemen and firemen were assured. He brought with him a European vision of downtown—pedestrian friendly and green—that could be enjoyed by citizens and visitors to the city. He was instrumental in bringing numerous businesses, such as Michelin, to the Greenville area. Max is often referred to as the “Father of Modern Greenville.”

My parents remained active and dedicated to the Jewish community. Dad created a prayer breakfast for all religions. He twice served as president of Beth Israel Synagogue and Mom was a long-serving treasurer of the Sisterhood. They helped start a local BBYO chapter and housed many young Jewish people from across the South during conventions. My mom began speaking publicly about the Holocaust, going to business organizations, churches, and schools, teaching her audience “to love, not hate.” At 94 she continues to speak and can mesmerize an auditorium of young adults or a group of prominent business leaders. When asked by a young student, “What do I tell my father when he tells me the Holocaust never happened?” she looks him straight in the eye and softly says, “Tell him you met me.”

Despite my parents’ active lives, family came first. My mother, an only child, likes to say she could never replace the 90 family members we lost in the Holocaust, but she is well on her way with 3 children, 10 grandchildren, and 18 great-grandchildren. 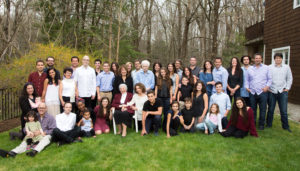 Max and Trude Heller received the Order of the Jewish Palmetto from the Jewish Historical Society in April 2007.
Click here to read the article