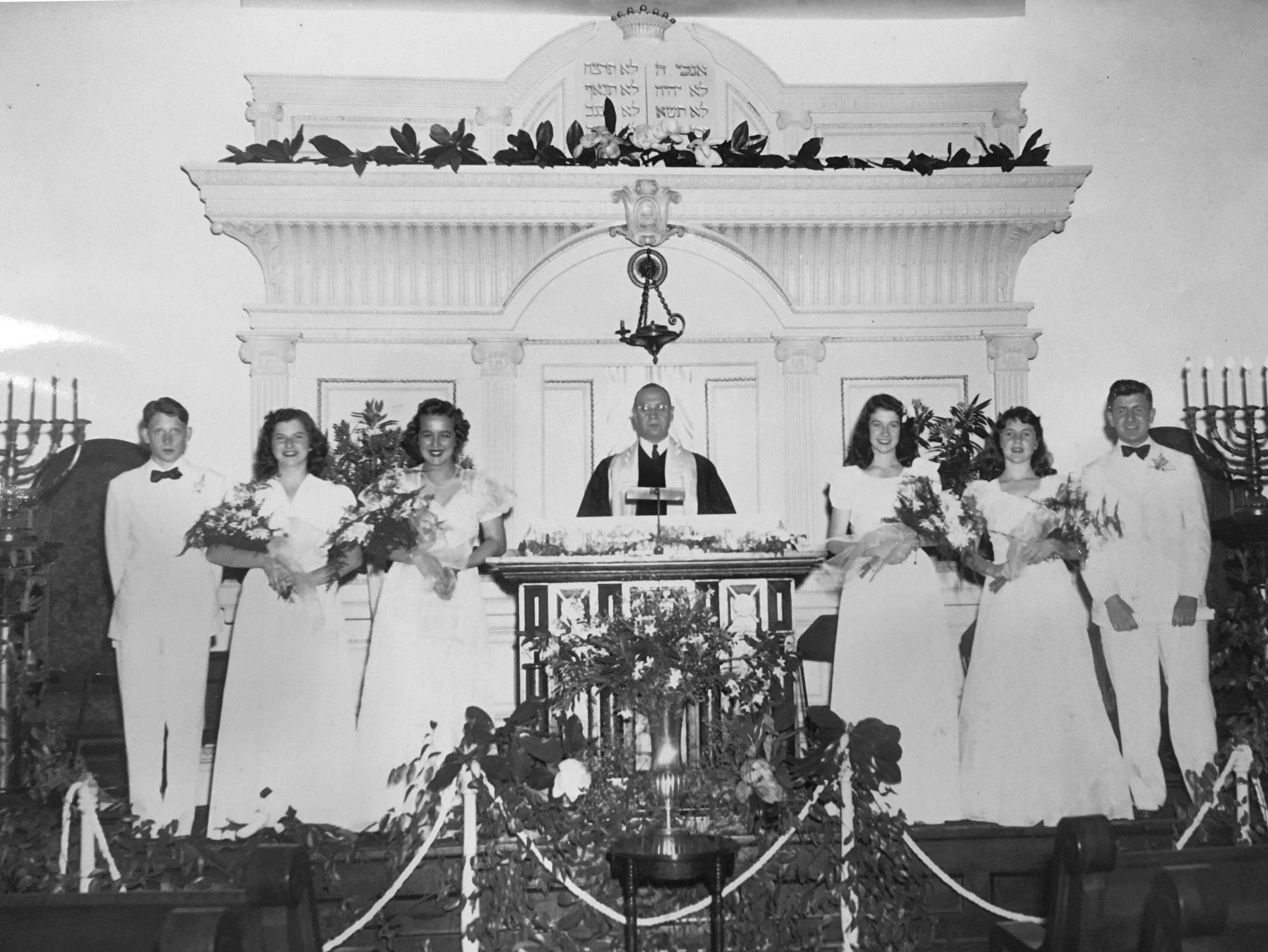 Rabbi Samuel Shillman presided over confirmation exercises, Temple Sinai, Sumter, SC, May 24, 1942. Patty Levi is third from right. Her twin brother, Wendell, is on the far left. Other confirmands, according to the program, were Faye Lomansky, Joan Schlosburg, Everett Ness, and Bernice Richman. Courtesy of Tricia Barnett Greenberg.

Patricia Levi Barnett came into this world along with her twin brother, Wendell M. Levi, Jr., on Friday, September 13, 1927, a day most consider bad luck. Not so for Mama, who possessed a confidence and fearlessness that served her well throughout her life. Born to Wendell M. Levi, an attorney from an old South Carolina family who was educated at the College of Charleston and University of Chicago, and Bertha London Levi, a Wellesley College graduate from Pittsburg, Pennsylvania, Mama was very grounded in Sumter, the South, and Judaism. Yet she also believed in venturing out of one’s comfort zone for exposure and education. 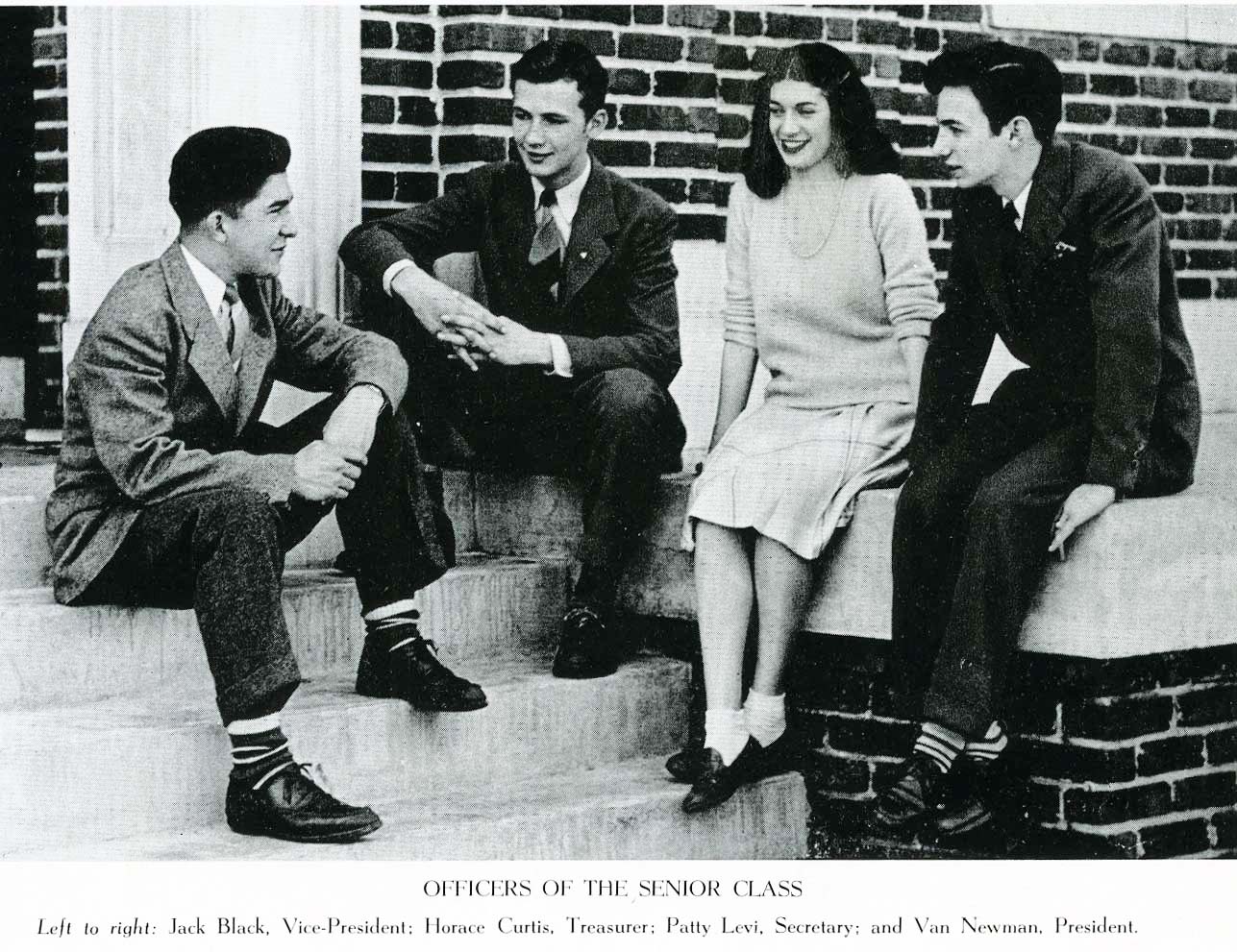 Beautiful, smart, and always popular, she was a conscientious student and excelled in leadership and sports. A class officer, senior superlative, and athlete, Mama and her twin, Wendell, graduated from Sumter High School in 1944. With only 11 grades in Sumter, she bravely ventured to Ferry Hall School (now Lake Forest Academy) in Lake Forest, Illinois, for 12th grade. Though not one of her favorite experiences, the school, snow, and dorm life broadened her horizons and fostered a sense of independence.

At a time when few women were encouraged to attend college far from home or major in the sciences, Mama spread her wings and went to Virginia’s Sweet Briar College. She flourished there academically and made lifelong friends from all around the country. She always said being Jewish helped her social life as the Jewish boys at University of Virginia and Washington and Lee sought her out, while her non-Jewish friends were always on the lookout for Jewish guys to fix her up with.

Mama majored in chemistry, an unusual field for a woman at the time, and her advisor encouraged her to apply to the master of chemistry program at Wellesley College near Boston, Massachusetts. Mama loved to tell the story that when she expressed doubt that her grades were good enough to get in the program, her professor responded that an A student in chemistry is commonplace but a B chemistry major with a good disposition is a rarity and that was Mama! She was accepted, and, after graduating from Sweet Briar in 1949, she headed to Boston.

Working on her master of chemistry at Wellesley and teaching physics and chemistry as a teacher’s assistant for one dollar a day plus room and board were among her proudest accomplishments and favorite memories. She enjoyed dating men from Harvard and MIT and relished discussing chemistry with them. Her combination of smarts, guts, common sense, and what she called “good listening skills” made her an attractive companion. Some of her male friends said she was sensible and different from the other female students and encouraged her to go into research.

Summer of 1950, Mama was back in Sumter and met Henry Davis Barnett (Bubba), who had returned to the Midlands town to run the family farm after the death of his parents. They quickly fell in love and Mama traded her test tubes and graduate school for a wedding ring and a traditional role as housewife and mother, providing a happy home for Daddy, me, and my brothers, Henry and Wendell.

Sharp and hard to keep down because of her love of a challenge, Mama was always involved with the farming business. Daddy grew peaches on a large scale and shipped them across the country and around the world. Mama noticed that many of the peaches, too ripe to ship out of town, were wasted. She decided to visit all the local grocery stores and South Carolina chains to see if they would carry the superior tree-ripened fruit. Not many, if any, could resist her charm and convincing salesmanship, so she became a pioneer in the concept of local sales, or, as we say now, “farm to table!” It was a huge success and a great sales addition for the business.

In the late 1970s, Mama served on the board of the Palmetto Pigeon Plant, which her father and Harold Moïse had started in 1923. When the manager of several years was terminated, the Levi and Moïse board members decided that Mama would be the best choice to step in and take over management of this unique and important family business. No shrinking violet, Mama did not hesitate to step up to the plate. So, for her first official paid job, she suddenly became CFO and CEO of America’s largest producer of squabs for the table, as well as for medical and dietary research.

Mama immediately tackled marketing. She reached out to Southern Living and other magazines to familiarize epicureans with the delicacy of squabs. She prepared a squab dinner and her recipe was printed in the magazine and its book of 1982 Annual Recipes. She figured out what ethnic groups consumed squabs on special occasions and marketed to them as well. She increased sales and, therefore, production. She taught herself the ins and outs of the business and got to know the customers and the employees. Meticulous, honest, and driven, she used her smarts and her charm to put the Pigeon Plant back on a profitable path and she remained at the helm for about 15 years.

Mama was a well-liked and respected leader in her volunteer work in the Sumter community. She was the first Jewish member of the Sumter Junior Welfare League and even served as an officer. She was selected to be the first president of the Wilson Hall School Association of Parents and Teachers, served as a trustee of the Sumter Museum, and endowed a portion of the Levi Barnett Gallery at the Sumter County Gallery of Art. Judaism was important to her and she passed on her love of the tradition to her children and her students at Temple Sinai’s religious school, where she taught for many years. She was a trustee of the temple, as well as president and treasurer of the Sinai Sisterhood. In fact, she remained treasurer almost until her death on June 1, 2016. She always believed in giving back to the community. 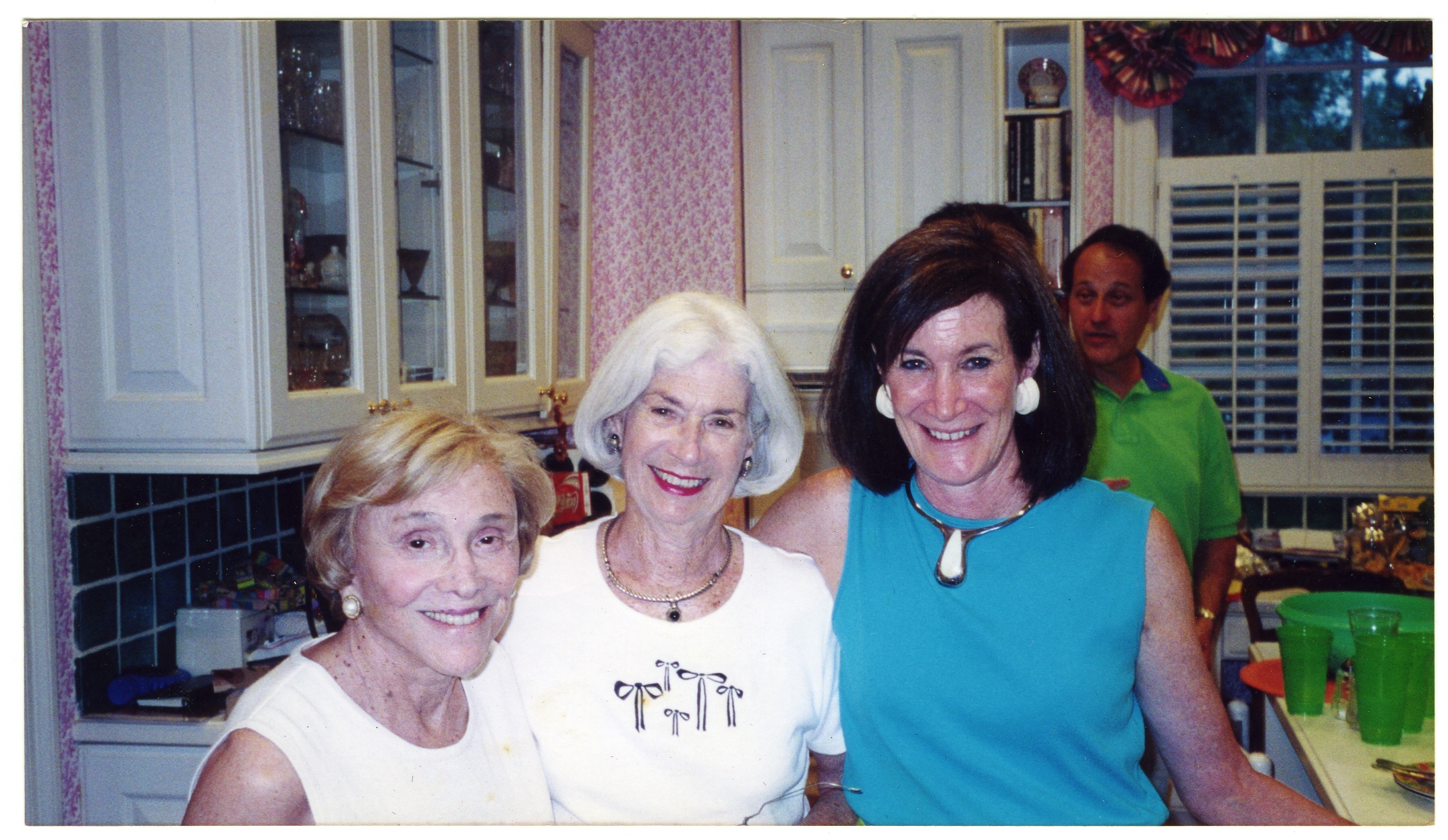 My mother was exceptionally beautiful, elegant, and refined to the eye, but the depth of her character, her integrity, and her loyalty were even more amazing. She loved a challenge and used reason and logic to tackle any situation. She was gutsy and feisty and eager to step up and speak up whenever it was needed. She took her responsibilities seriously and broke the norms. A lovely southern lady, she was indeed a “steel magnolia,” as her life revealed.