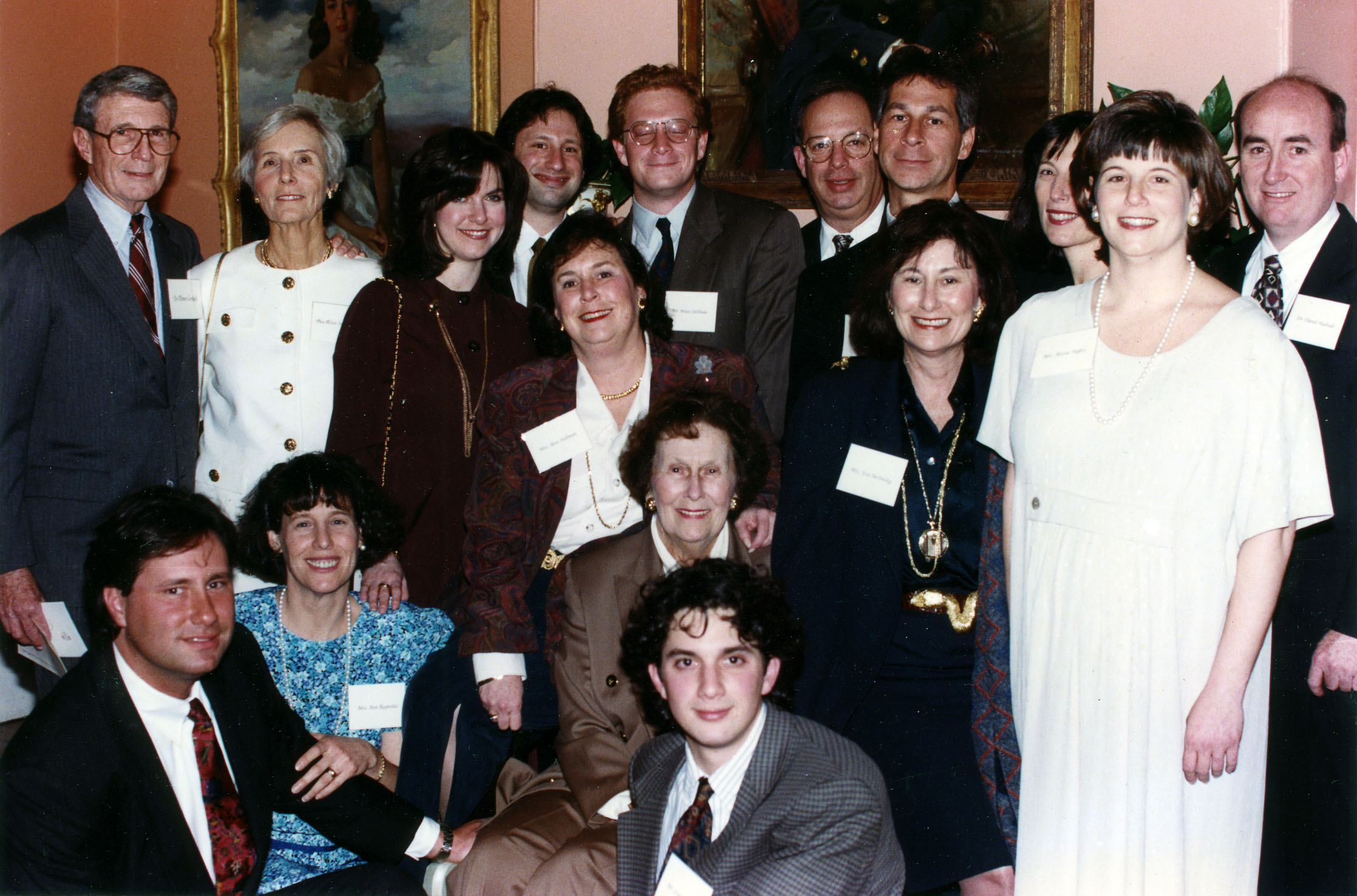 Doris Levkoff Meddin: To Make the World a Better Place

My mother, Doris Levkoff Meddin (Mrs. Hyman J. Meddin), was born on February 27, 1917—a date we didn’t know until 2007—in Augusta, Georgia, to Shier and Rebecca Rubin Levkoff, who were both born in Charleston, South Carolina. She always told us stories about going with her grandmother, Hannah Piatigorsky (Jacobs) Levkoff, to deliver charity to those in need in Augusta. This had a major impact on her and was the beginning of her wanting to make the world a better place. 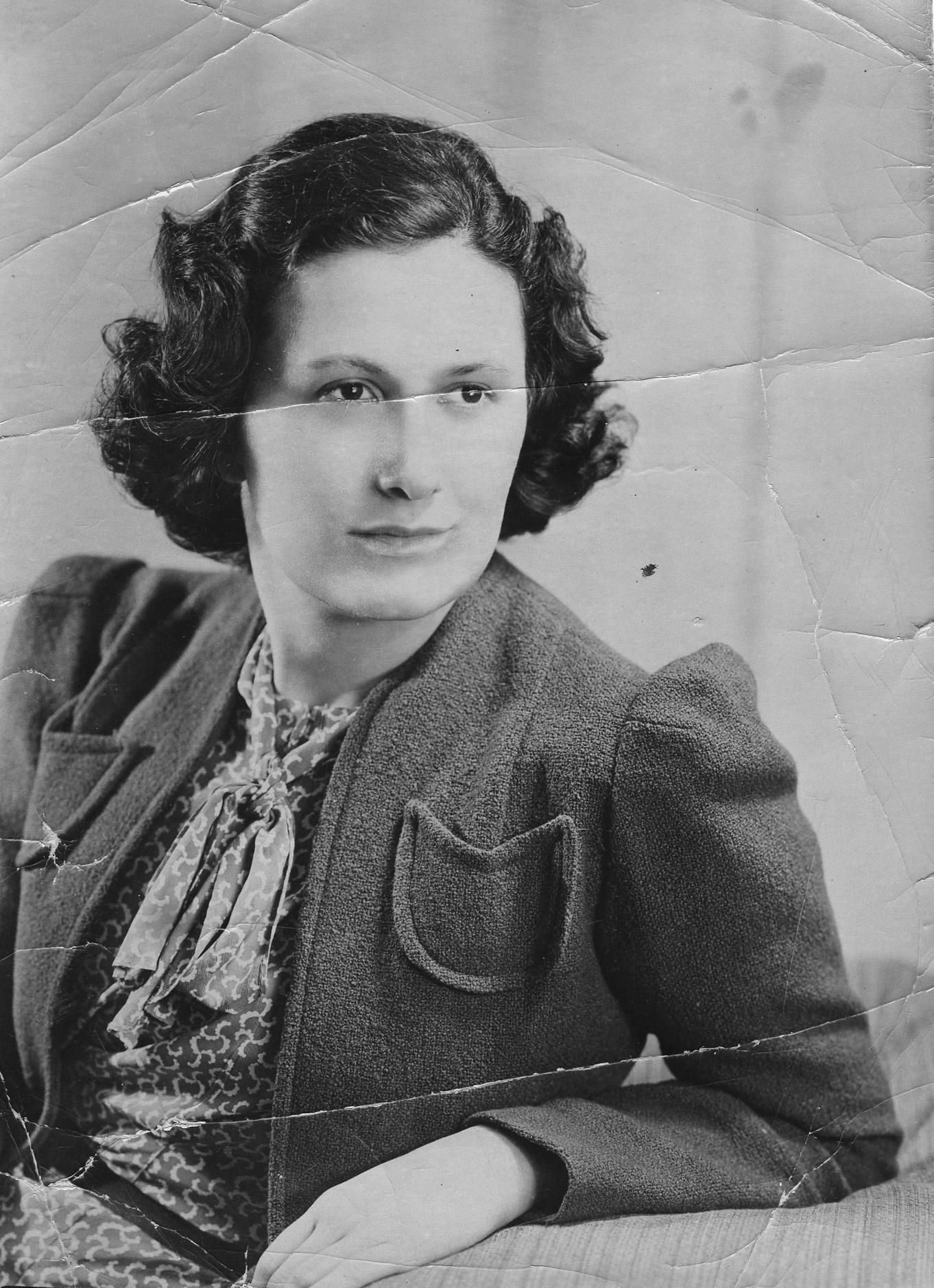 Mama graduated from Winthrop College in 1937 with a bachelor of arts in psychology and sociology. She did social work for a year before she got married. As the story goes, she would go by the meat packing plant where her boyfriend, Hyman J. Meddin, worked, and he would fill her car with gas and give her food to deliver to her clients. She was continuing to do what her grandmother taught her.

After her children were grown, Mama discovered that the University of Southern Illinois was offering graduate degrees in Charleston. In 1980, she got a master’s degree in education with an emphasis in counseling. The final requirement for this degree was to work for one year. This was a challenge as my father didn’t want her to work. It was solved by Mama taking a job at the Family Service Agency as a “dollar a year person.” 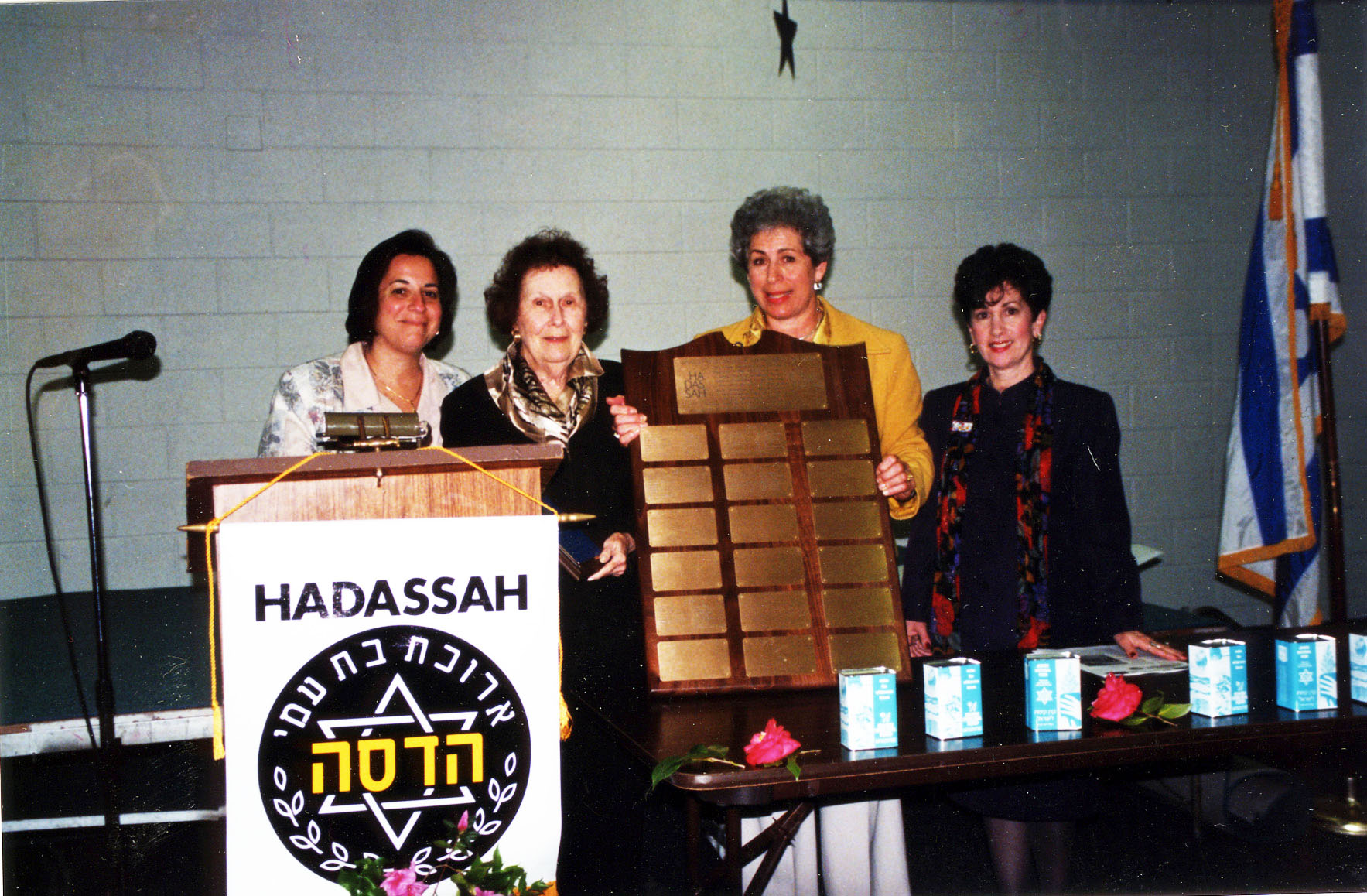 Doris Levkoff Meddin (second from left) was named A Woman Who Makes a Difference by the Charleston chapter of the National Council of Jewish Women in 1998. With Doris from left, are Ellen Katzman, executive director of  JCC; Leah Chase, president of Hadassah; and Anita MoÏse Rosefield Rosenberg, president of JCC and NCJW. Courtesy of Ann Meddin Hellman.

In her first year of marriage, Mama was active in 21 different organizations. She remained heavily involved in the community until her death, initiating programs that would better the lives of others. Among the boards she was on were the South Carolina College of Pharmacy’s Board of Advisors, the College of Charleston’s School of the Arts, the Dee Norton Lowcountry Children’s Center, Darkness to Light, and the Florence Crittenton Home.

In 1976, Mama was a recipient of the Distinguished Service Award, Charleston Area Mental Health Association, and, in 1986, she was honored by the Society of 1824, Health Sciences Foundation of the Medical University of South Carolina. In 1998, she was recognized by the National Council of Jewish Women (NCJW), Charleston Section, as A Woman Who Makes a Difference. The award, sponsored annually by the Charleston chapter of Hadassah and the women’s division of the Charleston Jewish Federation, is presented to one woman from each of the local Jewish women’s organizations, including the sisterhoods, for her volunteer work on that group’s behalf.

Mama was a past president of the Charleston Area Mental Health Association and K. K. Beth Elohim Sisterhood. She was a board member of the City of Charleston Office of Economic Opportunity and the South Carolina Mental Health Association, and a chair of the UNICEF Year of the Child, Charleston.  She helped start Charleston Pink Ladies Volunteer Program at Roper Hospital, a collaborative effort of Charleston’s NCJW and the Junior League. In pursuing her volunteer activities, she always let people know her ideas and actions personified her Jewish values.

Because her brother, Dr. Abner H. Levkoff, was head of pediatrics, Mama would visit the Medical University of South Carolina (MUSC) often. On one of these visits, she noticed that children were taken to procedures on hospital beds. This upset her, so she bought little red wagons and arranged for a playroom to make the kids’ experience in the hospital less scary and more fun.

Mama believed children had to learn how to be kind. She developed a program for students in the lower grades in the City of Charleston to draw a picture of what they thought kindness was. To reward the winners, whose pictures showed that they knew what kindness was, she gave each an ice cream cone. About the same time, the News and Courier came out with a folder for 15 cents on how teachers could teach kindness in the classroom. Mama bought 200 of them and gave them to the Charleston County school board to distribute to teachers.

Mama believed in equal rights. When Burton Padoll was the rabbi at K.K. Beth Elohim in the 1960s, he wanted to have an interracial civil rights meeting. Mama let him hold the meeting at our house on Murray Boulevard. She was not concerned about what others thought. She knew she was doing the right thing. 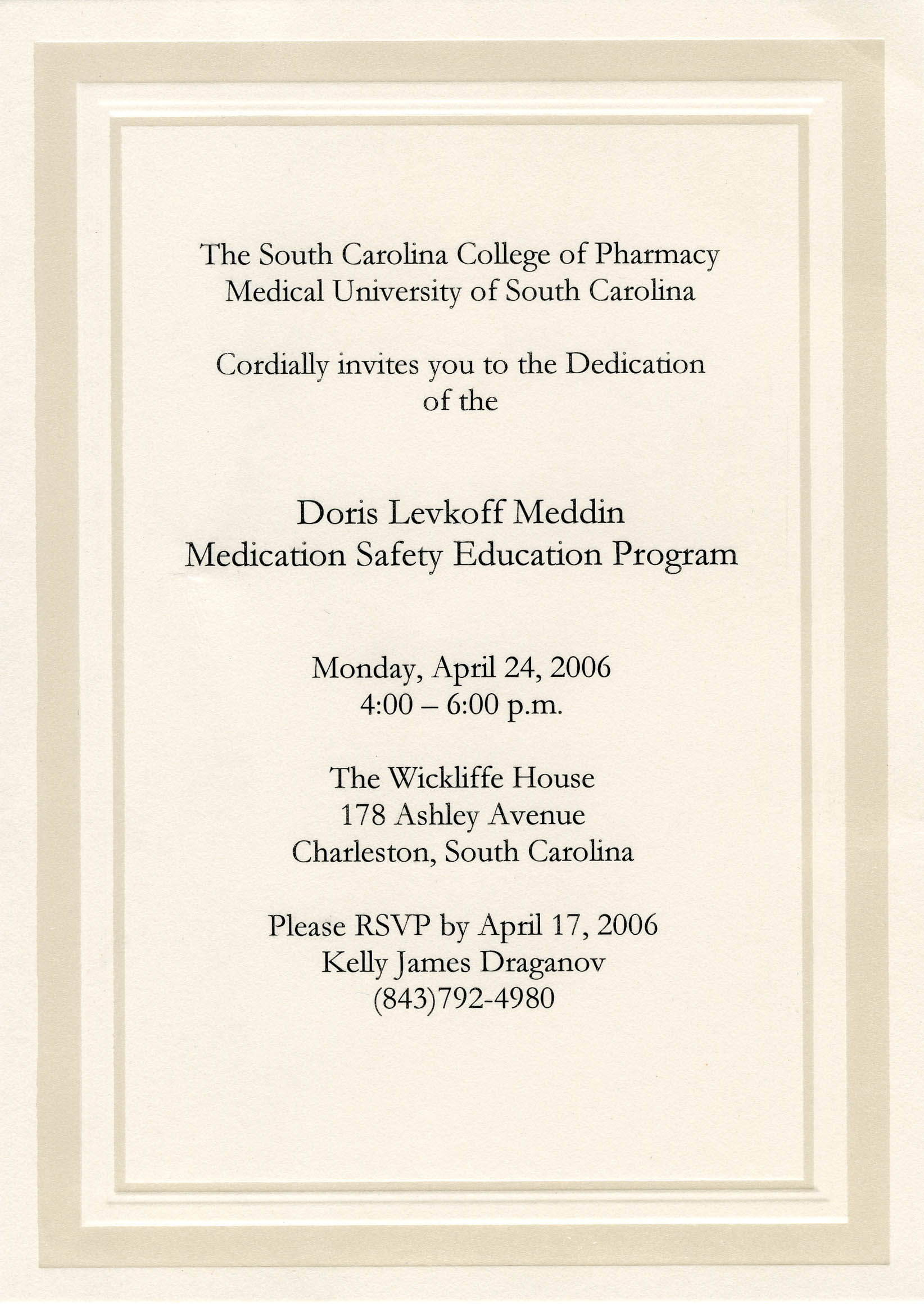 Listening to the radio one night, Mama heard that the Dallas Section of NCJW had designed a project, Safeguard for Seniors, to find people at risk from medication complications. She presented this idea to the NCJW in Charleston, then approached the Medical University College of Pharmacy for help. The program became the Doris Levkoff Meddin Medication Safety Education Program at MUSC, created to educate healthcare professionals and the general public about drug safety and to help reduce the number of adverse drug effects experienced by patients statewide. Because of this program, Mama was inducted as an honorary member of Phi Lambda Sigma Leadership Society of the South Carolina College of Pharmacy, MUSC.

With all of this, Mama still found time to operate her own real estate company. In selling real estate, she was always guided by her Jewish beliefs. While showing one client houses, the client stated she didn’t want to live near Jews. Mama drove the person back to where she picked her up and told her that she would have to find another agent.

Mama’s eating habits were looked down upon by the many doctors she knew, whether they were family, professors at MUSC, or just friends, but thanks to her unlimited consumption of chocolate she lived to be 96. Knowing there was so much to be done to repair the world, she was determined to do as much as she could. She was a perpetual optimist. She had no boundaries and would call upon anyone at any level who she felt could make her dreams come true and help others have a better life.