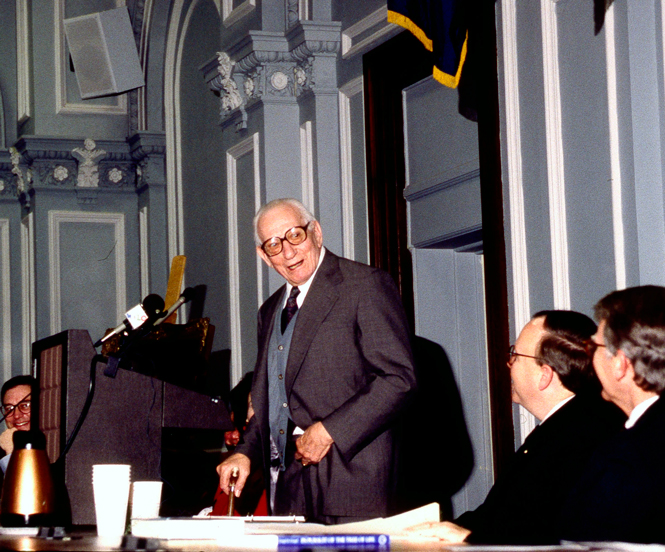 I recall my grandfather, Hyman Rubin, Sr., saying more than once, always with an uncharacteristic double negative for emphasis, “My father had to run from the Cossacks—I don’t have to run from nobody!” Even as a child I took from that statement two powerful ideas: on the one hand, it showed his love and appreciation for the United States of America, a place where the son of poor immigrants could become a state senator, and a place where a prominent Jew had no need to fear persecution. On the other hand, it showed why he felt called to public service and to the fight for racial equality. Fear of pogroms might have forced his ancestors to keep their heads down, but he was free to challenge injustice, and he felt compelled to do so.

Even though he lived in a time when anti-Jewish prejudice was more widespread and acceptable than today, he would never acknowledge it as anything other than “a pinprick of an irritant.” He never excused antisemitism, but he saw its American incarnation as fundamentally different from and less threatening than the form it took in other parts of the world. It might prevent him from playing golf with other legislators at their country club, but it couldn’t stop him from becoming successful in business, winning offices of public trust, and openly challenging his community’s laws and traditions when necessary.

But if the United States was a safe and tolerant place for Jews, South Carolina in the 1950s and 1960s offered no such security for its black citizens. For my grandfather, the racial policies and attitudes of the country (and especially the South) were America’s great moral failing. He never doubted what would cause those policies and attitudes to change: leadership. He was only an amateur historian, but he had an instinctive grasp of the importance of leadership in history. When I was in graduate school the historiographical trend was to emphasize the role that social structures, economic forces, and culture played in determining historical outcomes. Since then I have noticed the scholarly pendulum swinging back towards the importance of individual decisions, and particularly toward the importance of leadership, in changing the course of events. As a historian my grandfather was ahead of his time.

Understanding that race relations and racial justice were the key issues of his era, and believing that only strong, morally driven, and fearless leadership would win the day, he did all he could to put his beliefs into action. He often told the story of his father, Joseph Rubin, knocking out the “town bully” who had attacked him. I’m quite sure that memory was a formative one for my grandfather, and his work as a private citizen and later as a legislator showed a lifelong commitment to confronting the powerful and defending the powerless. The causes to which he devoted the most energy all fill that bill: protecting the Congaree Swamp from logging, amending the state’s strict no-exceptions ban on abortion, urging state support for blind and elderly citizens. But of all these, he took the greatest pride in his fight for civil rights.

In the early 1960s he publicly advocated desegregation, as well as working behind the scenes to ensure that it occurred peacefully. One of his key contributions was his co-founding, along with University of South Carolina President Tom Jones, of an interracial Luncheon Club—the first of its kind in Columbia, and possibly in South Carolina—to bring white and black leaders together. Recognizing that these leaders were usually brought together by crisis, and had not had the chance to get to know each other before they had to resolve problems, the two believed the Luncheon Club would remedy that. My grandfather also worked closely with downtown business owners, and especially lunch counter operators, to assure them that if they began serving black customers, white patrons would still come. Meanwhile, he encouraged white Columbians to eat at the lunch counters, sometimes providing the lunch money himself!

The same forces that threatened to boycott integrated lunchrooms also tried to take control of Columbia’s city council in 1963, advocating a “segregation ticket” to roll back the changes that had been made. (Lunch counters were desegregated in 1962, but the “white” and “colored” signs were not removed until later in 1963.) My grandfather was on the opposing “integration ticket,” whose victory led to the end of legal segregation in the city. In these efforts and in his many public speeches opposing discrimination and advocating goodwill, Hyman Rubin, Sr., showed he was not afraid to take unpopular stands in defense of freedom and equality. He received plenty of hate mail (including death threats, as I later learned), but to him that only proved he was on the morally right side. If those who opposed him were motivated by hate, it only showed the weakness of their cause. He was completely dismissive of their threats.

I learned many lessons from my grandfather, some historical, some philosophical, some practical, and some moral. He often said he was too proud to lie or steal: lying and stealing are sneaky, and a proud man does not sneak. I found it humorous, but also insightful: a person who knows himself well can use one flaw (pride) to guard against others (dishonesty, pettiness, greed). More than anything else, though, I remember two things about him: the love and gratitude he felt for this country, and the obligation he felt to make it better. In fulfilling that obligation, he never ran from anybody.