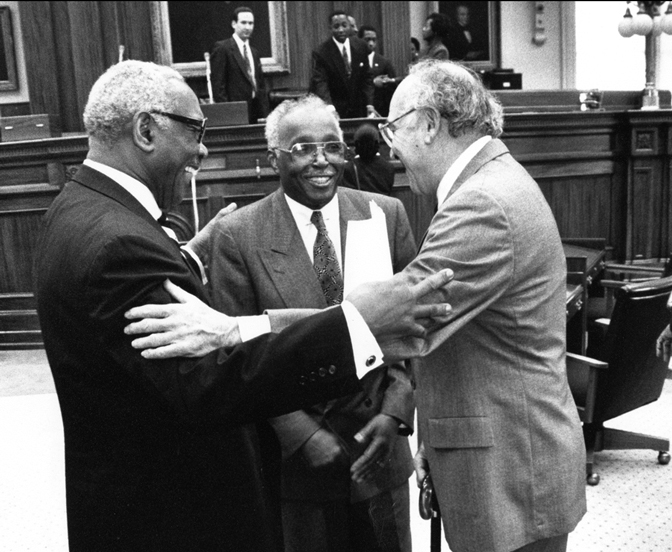 Some years ago the Alabama Bar Association dedicated a memorial in Monroeville to the ideals personified by Atticus Finch in To Kill a Mockingbird. To mark the ceremony, author Harper Lee wrote a letter to the bar association, which in pertinent part said, “Your profession has always had some real life heroes—lawyers of great courage and uncompromising integrity who did what was right when right was an unpopular and sometimes dangerous thing to do.” Such a man was Isadore E. Lourie, my mentor and hero, whom I had the privilege of working with in his law practice from 1973 to 1983.

A large percentage of our practice involved representing African Americans and other minorities from the Midlands of South Carolina. Our clients trusted Senator Lourie to be a zealous advocate for their cause. They knew by his words, actions, and deeds that he had a sense of compassion for the less fortunate and less privileged members of society. He cherished the trust that people put in him and his goal was to give a voice to those who had no voice. Senator Lourie wanted to improve the quality of life of the people he served in his law practice and in the legislature. Our firm was an oasis for minorities facing legal problems.

Isadore Lourie was born in 1932 in St. George. He entered the University of South Carolina in 1951, and was admitted to the South Carolina Bar in 1956. He married Susan Reiner in 1959, and they had three sons—Lance, Joel, and Neil. Senator Lourie took his skills as a legal advocate and leader and combined them with his talents as a politician to influence the path of legislation from 1962 to 1992. Susan was his partner in his political quests, as well as in life.

In the legislature Senator Lourie was a member of the group known as the Young Turks, who broke from the “old guard” and committed themselves, in his words, to “the cause of social and economic justice for all our citizens . . . this was the anchor of our entire legislative program.” The Young Turks fought for and succeeded in passing legislation that would assist education, teachers, public kindergarten, consumer affairs, minorities, the handicapped, senior citizens, transportation, housing, and workers’ compensation. From their efforts came the Workers’ Compensation Commission, the Consumer Protection Agency, the Public Kindergarten Program, the South Carolina Council on Aging, the South Carolina Commission on Race Relations, and a host of other state programs.

One of Senator Lourie’s most lasting contributions is in the area of race relations. Early in his career he befriended two of the great African-American civil rights leaders in Richland County—Reverend C. J. Whitaker and Reverend I. DeQuincey Newman. They both recognized the commitment, force, and energy of Isadore Lourie and, together as a team, they began to change the racial landscape. With Senator Lourie’s help, African Americans were appointed to boards and commissions from which they were formerly excluded. They obtained employment in state and county offices, and they began to have a more significant role in politics. In 1972 these men helped elect two of the first African Americans to the South Carolina House of Representatives—I. S. Leevy Johnson and Jim Felder.

Praise for the senator has come from friends in high places.Alex Sanders, Isadore Lourie’s desk mate in the senate, and former president of the College of Charleston and chief judge of the South Carolina Court of Appeals, reported: “During the tumultuous time of the ’60s, Isadore was one of the most meaningful voices that connected black and white people.”

Governor Dick Riley, who served in the state senate and as secretary of education under President Bill Clinton, described his friend’s impact on South Carolina: “Much of the major legislative accomplishments of the past quarter century are due to the leadership and caring of Isadore Lourie. He’s been there with his colleagues when vision and strength were needed.”

And Fritz Hollings, governor and United States senator, succinctly summed up Senator Lourie’s career: “He was the most progressive lawmaker our state has ever known.”