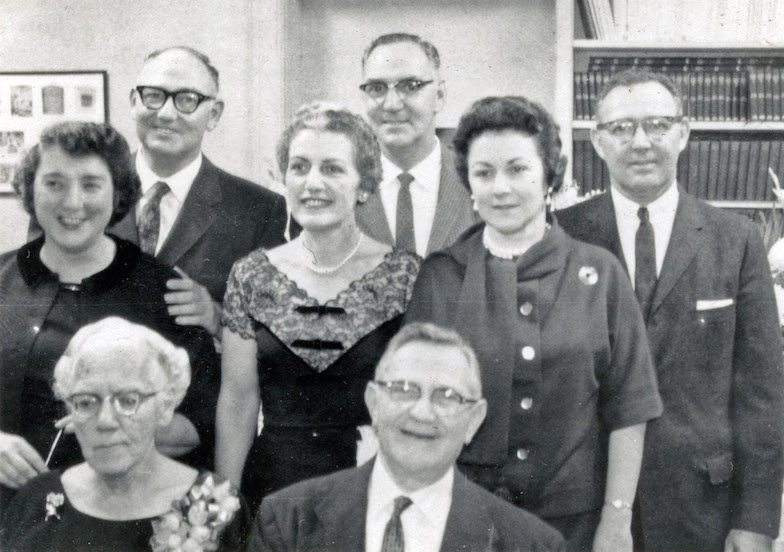 Albert & Sons: The Schneiders of Georgetown

My grandfather Albert Max Schneider arrived in Georgetown around 1906 at the invitation of J. M. Ringel, who asked him to clerk at one of Ringel’s several department stores on Front Street. Albert had come to the United States from Russia at the age of seven, arriving in New York in 1892. The family settled first in Brooklyn, and even after moving to South Carolina the younger generation continued to spend summers in New York. Albert went south as early as 1902; family lore claims he worked his way to Charleston on a ship. Whether arriving as passenger or crew, he first worked as a cotton mill clerk in Summerton and then for a Charleston merchant, before being recruited by Ringel.

“Everybody worked for Mr. Ringel when they first came to Georgetown . . . . [I]f they needed a job and they were Jewish, he would give them a job. . . . Jewish merchants would get the young men to come to work for them. . . [because] anybody that had daughters wanted to make sure that they’d marry a Jewish man.” —Philip Schneider, 1995. [Philip Schneider and Alwyn Goldstein, audio interview by Dale Rosengarten, 30 January 1995, Mss. 1035-004, Special Collections, College of Charleston. Audio and transcript available online at: http://lcdl.library.cofc.edu/lcdl/catalog/lcdl:11802]

On New Year’s Eve, 1910, Albert married Fannie Lewenthal of Darlington, South Carolina. In 1911 they opened Hyman-Schneider Co., a dry goods store on Front Street, with help from Fannie’s uncle Abe Hyman, who provided a letter of credit. The story goes that the first month or two, when they totaled up the receipts, there were healthy profits. Albert joked that Hyman thought that was pretty good so he declared himself a partner.

Albert and Fannie had three sons between 1912 and 1916. The two oldest—Philip and Harold—would go into business with their father, and the youngest—my father, Cecil—would become an attorney. The Schneiders purchased a house on Prince Street that had been the home of Joseph Rainey, the first black man elected to the U.S. Congress, now a National Historic Landmark owned by the Camlin family.

The business grew into adjacent buildings and was renamed The New Store. Expanding into appliances and furniture, adding more locations, it became one of the biggest department stores in the Southeast. The only downturn came during the Depression when Albert had to revert to peddling, traveling the country selling radios, dry goods, and refrigerators from the back of his truck. Philip described how they sold Zenith farm radios: they made the sale, cut poles, dug holes, and ran wires, all for $39.50.

In the 1930s all the Front Street merchants stayed open late on Saturday nights for shoppers from as far away as Awendaw, 40 miles down the coast. Bar mitzvah–age boys studied Hebrew in the back of Alwyn Goldstein’s shop on Sundays. So many stores were Jewish-owned, on the High Holidays the town virtually “shut down.”

For a time in the 1950s, the Schneiders endeavored to sell the first home microwave ovens, which were the size of a modern dishwasher. New Store employees would demonstrate them in the main window. A former employee recalls the staff sitting in the big display windows to watch the annual Christmas parade. Many Georgetonians saw their first TV shows through those windows as they gathered there on summer evenings. I recall my fascination with the colorful straw hats for sale and the huge back doors open to the wharf. My brother, Michael, and Harold Schneider’s son, Robert, have vivid memories of Albert drawing advertisements on the sidewalk in the summer, a white handkerchief tied around his neck. On the front window he painted, “If you take my money, you take trash. If you take my good name, you take all.”

In the 1960s the store consolidated at 730–733 Front Street. Albert remained active until his death in 1967. Harold and Philip finally closed the store in 1988, at the time, the oldest continually operating business in town.

Albert is remembered as a leader at Temple Beth Elohim, exerting his influence over the visiting rabbi from Charleston, Allan Tarshish (1907–1982). If a High Holiday service ran long, Albert would rise, walk in front of the bimah to a window, and gaze out—his sign that it was time to wrap up. 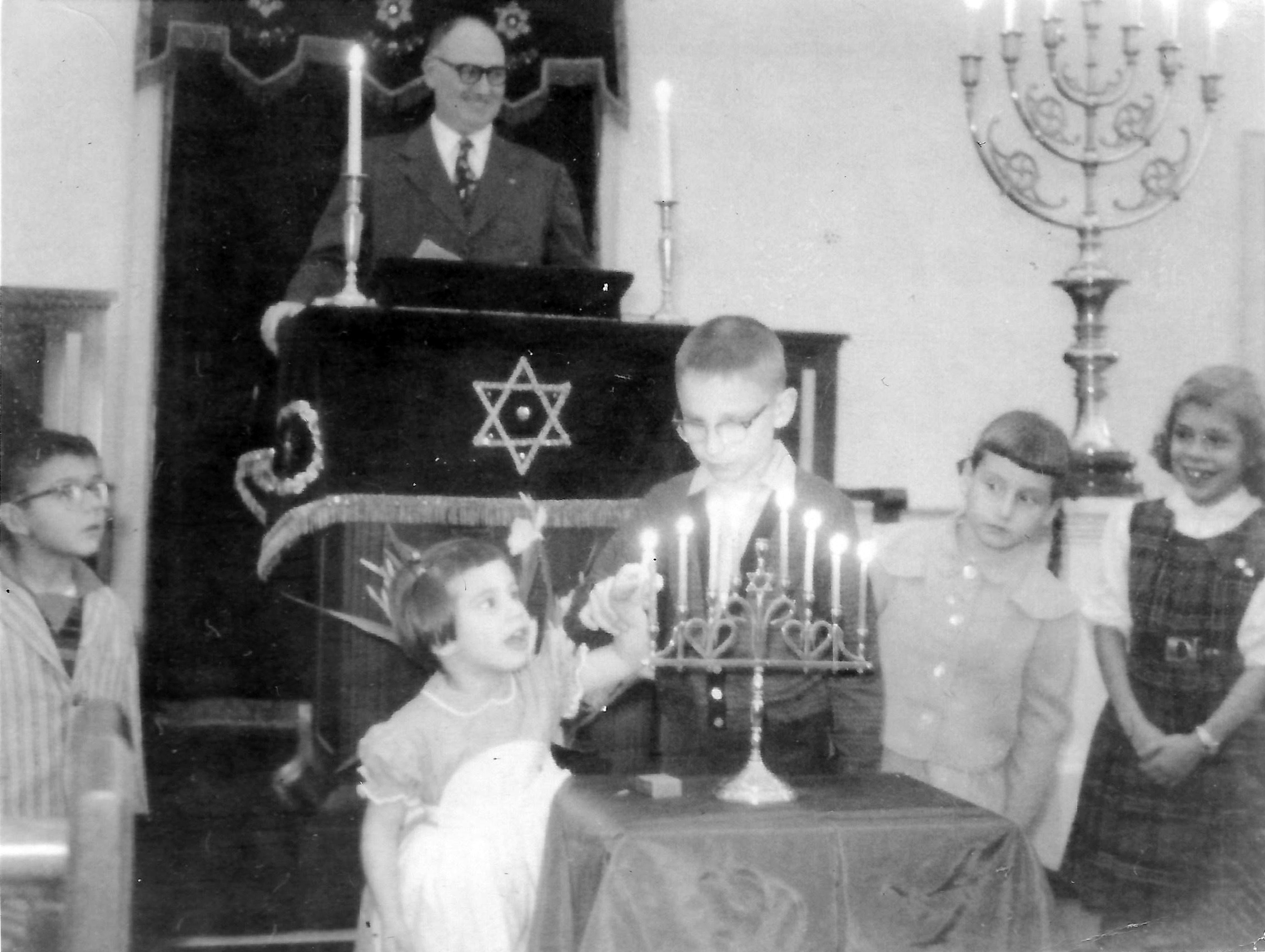 Grampa Albert certainly fancied himself master of his universe. He decided to bulldoze the dunes in front of the family’s two-story house on Pawley’s Island so they would have a better ocean view. New walkways were then built to the beach. My cousin Robert recalls: “The same year the dunes were bulldozed, Hurricane Hazel struck. We came to see the house after the storm. The house had become one story, and the downstairs was covered in sand and water. The lower level was never used again except to accommodate a ringer washing machine.”

In our parents’ and our generation, social and spiritual life was thoroughly interdenominational. Catholic children came to Purim parties and I sang in the Episcopal Junior Choir. Michael is notorious among his Episcopal childhood friends for his performance during a children’s program at Prince George’s. Reverend Irwin Hulbert asked the assembled youngsters, “Who can tell me about Jesus?” Six-year-old Michael’s hand shot up. He stood and proudly stated, “My daddy says, Jesus was a Jew!” Amidst giggles from his friends, Rev. Hulbert said, “That’s right, Michael. You may be seated.”

A final word about the son who didn’t go into the family business. When my father, Cecil, returned from World War II, he opened a law office on Front Street. A typical small-town lawyer, he handled a variety of cases for all sorts of people, many of whom brought payment to our house in the form of vegetables or freshly caught fish.

For 30 years, until his death at the age of 61, Cecil was a bulwark of Georgetown’s civic life, serving 24 years on city council and two terms as mayor pro-tem. If not for failing health in early 1977, he might have been the eighth Jewish mayor of Georgetown. He was the youngest circuit judge in the state’s history, chaired the Winyah Indigo Society, and became the president of Temple Beth Elohim in 1948, as the congregation prepared to build its first synagogue.

Two of Albert’s seven grandchildren now live in Georgetown County. I am happy to be one of them, to visit the revived temple, and to share memories with old friends and new.