“The ‘Kingdom of Israel’ in this town”

This evaluation comes not from a letter or a newspaper article, but rather, from America’s earliest credit reports. In 1841 the Mercantile Agency began collecting local opinions of businessmen from correspondents across the country, with an eye toward determining their creditworthiness. These records are a remarkable and largely untapped source for exploring the businesses and reputations of Charleston Jews. Further evidence of their activities can be found in newspapers, census data, city directories, and archival collections, which have been explored anew by historical researcher Sarah Fick as part of Mapping Jewish Charleston, an ambitious digital project from the Pearlstine/Lipov Center for Southern Jewish Culture. Philip M. Cohen’s activities are particularly well documented in these sources, which makes his story a useful one for understanding the broader world of Jewish business in antebellum Charleston.

Cohen, who sold wholesale “drugs, chemicals, perfumery, paints, oils, dye stuffs, brushes, surgical instruments, patent medicines, and fancy articles,” was hardworking, but also relatively privileged.2 He was a native son with a medical degree and was well connected in the city. His wife was Cordelia Moïse (1810–1869), a member of a prominent local family, and his uncle—also his wife’s step-father—was Hyam Cohen (1788–1850), Charleston’s city assessor.3 Yet, despite his status, by 1855 his business had failed.

Jews were prominent in many aspects of Charleston’s public life, and a number of them were fabulously wealthy. But Jewish merchants were a diverse lot, including men and women, immigrant and native born, well-to-do and of modest means. Their businesses ranged from pharmacies and groceries to hardware shops and dry goods stores. Through these various activities, Jews made their way in the city, although success was neither easy nor guaranteed. No matter their background or line of business, Jewish merchants discovered that what mattered most were relationships and reputations.

According to the credit reports, in the late 1840s Cohen was worth $20,000, had a good reputation, and owned a home and “several negros.”4 Slave-owning marked Cohen as a typical, if relatively well-off, Charleston Jew. Members of Charleston’s Jewish merchant community regularly owned slaves and several worked with much success as slave traders.5 Whatever their “commodity” of choice, however, Jewish merchants’ economic status was not certain to rise. Many Jewish merchants, especially immigrants, floated into town, failed to achieve economic stability, and left soon after. 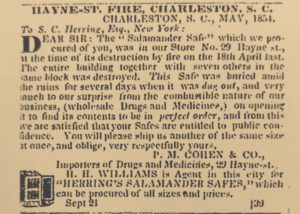 Even for a native Charlestonian like Cohen, business was not easy. Mounting debts, robust competition, and disasters all could trouble economic life. By 1853 Cohen was working with a Jewish partner named Philip Wineman and was falling behind on payments to their creditors.6 Next, a fire broke out at his place of business and though they had insurance, it did not cover their costs. Popular opinion held that “even if he [should] recover the insurance money (wh[ich] is somewhat doubtful) he will be worth, when ‘boiled down to cash’ about one dollar.” This turned out to be a self-fulfilling prophecy. By February 1855 the store had failed.7 The following year, with backing from friends, Cohen opened a more modest drugstore and operated it under his wife’s name to avoid association with his previous failure.8 While it is unclear how active Cordelia was in this new business, other women did enjoy an independent status as “feme sole” or “sole trader.” These were single women, widows, and wives whose husbands gave permission for them to conduct business and own property.9

Jewish men and women alike entered into business with non-Jews, though they often worked with co-religionists, if not relatives. Philip M. Cohen’s brother Lawrence L. Cohen, also a Medical College graduate, joined him in the business; by 1841 their uncle Hyam—with whom Philip and Cordelia lived, first on Broad Street and later on Tradd—moved his office to their building at 63 Broad.10 They later moved to 29 Hayne Street, where among Cohen’s customers was one of his wife’s Moïse cousins, Philip Augustus. He operated a drug store at 221 King Street with two gentiles, John J. Ward, who eventually left the firm, and John J. Grierson.11 Another Moïse cousin, Edwin, was an auctioneer and grocer who rented space at 28 Vendue Range, an address with a history of occupation by Jewish merchants.12 He had entered into business as a clerk for a Jewish firm and in 1853 went into business on his own.13

Whether between Jews and non-Jews or among Jews, business relationships were not always harmonious. When his business failed, Cohen’s stock was purchased by Benjamin Mordecai, a fellow Jew who later became a prominent supporter of the Confederate cause.14 Mordecai was a wealthy slave trader, and the credit reporters estimated that he purchased the store’s stock at half of its actual value.15 He turned the store over to J. H. Ashurst, the former bookkeeper, and kept Wineman on as clerk, pushing Cohen out.16

While these relationships determined access to capital, reputation shaped access to credit, which was becoming increasingly important in the mid-19th century.17 Moïse and Grierson were deemed “steady and temperate” although Moïse’s “style of living”—considering that he owned no property—seemed to the credit reporter “unsuit[able].” Potential creditors, he determined, should thus be “very cautious.”18 Of Edwin Moïse, in 1853 one credit reporter could “see 0/0 [nothing] to prevent him from getting his share of ‘plunder’ out of this wide world.” By March 1856, however, he had quit business and was described as “character below par.”19

Besides noting financial and personal attributes, credit reporters often mentioned the Jewish identity of the merchant and considered it in evaluating creditworthiness.20 Descriptions of Philip Cohen regularly mentioned he was a “Jew,” sometimes differentiating him as a (presumably more trustworthy) “Native Jew.” After his failure, however, he was described as “an Israelite indeed but not without guile.”21 Within six weeks of Benjamin Mordecai’s takeover of Cohen’s business, it had “acquired a very smutty reputation.” The new owner was described as “possess[ing] of a large share of the qualities so generally attributed to Israelites” and the new firm as a “Jew Concern” and “JEWS from A to Z.” The report elaborated, “If paying is profitable + politic they will pay.”22

Jewish identity could be a liability, then, but it could also be an asset. When Moïse and Grierson opened for business, the credit reporter noted that competition was fierce, but predicted they “will get the patronage of the ‘Kingdom of Israel’ in this town, a large Kingdom.”23 In the first half of the 19th century, even as religious reform and sectionalist politics were on the rise, Charleston Jews were working to put food on their tables. Many of them did so by buying and selling commodities, work in which their Jewishness shaped their business relationships, their financial identities, and their economic trajectories.