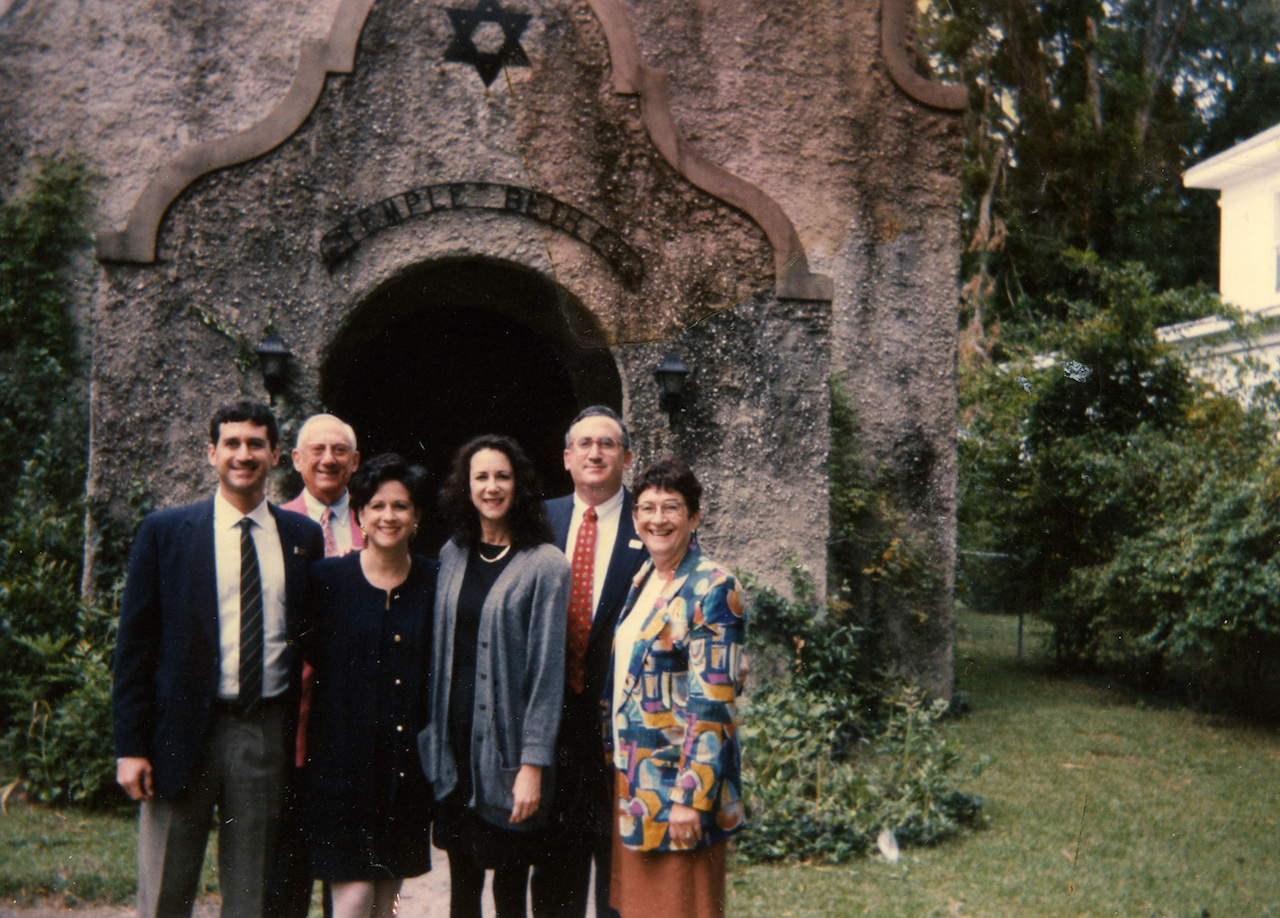 Growing Up Jewish in Camden

When I was growing up in Camden, South Carolina, in the 1960s and ’70s, the city had a population of around 8,000. Now it is about 7,000. But while the city itself has lost some residents, Kershaw County has really ballooned. The Jewish population of Camden was thriving when my siblings, Harry, Cheryl, Becky, and I were children, but it was starting its descent. Many kids, like me, left Camden after high school and did not return.

There were a few Jewish families in Camden with children: the Kareshes, Schreibers, James, and others. We would see each other at Jewish functions. My brother, sisters, and I were socially friendly with all of them. One of my earliest memories associated with Judaism was my brother Harry’s bar mitzvah. It was a big event and many of our out-of-town relatives attended. The celebration took place at the Holiday Inn in Lugoff, which may have been one of the few hotels in the Camden area and probably the only one that could hold the large crowd that attended.

Growing up Jewish in a small town was different from being raised in a city that had enough Jewish families to fill a synagogue and maintain a youth group. Most of my friends were not Jewish. They really didn’t understand my religion, but it was never an issue. The only difference was I got out of school for two days during the High Holidays, and we didn’t celebrate Christmas with a tree, though one time we had a “Hanukkah bush” made of tree branches and gum drops. We usually had gifts during the eight days of Hanukkah and on Christmas morning.

My sister Becky and I were the only Jews at our small, private Christian school, Thomas Sumter Academy in Dalzell. The school gave us a quality education. My classmates may not have known why we got out of school each year for Rosh Hashanah and Yom Kippur, but the headmaster, Chuck Owens, was a good friend of my Camden grandmother, Minnie Tewell Baum, and he always excused us so we could attend services.

Besides opening every fall for the High Holidays, our active Jewish congregation held some Friday night services at Temple Beth El on Lyttleton Street. Behind the small sanctuary is an annex that housed a Sunday school. While we were growing up, however, there were not enough children to warrant weekly classes, so my brother, sisters, and I were driven to Temple Sinai in Sumter every Sunday morning. After Sunday school, we were treated to lunch at one of the restaurants in town.

Our home was next to the temple and served as the place for oneg after Shabbat services. My mom, Ann Briskin Baum, would have coffee and such for the Jewish families that would stop by.

Our house also served as a landing spot of sorts for a number of relatives. They would either come for a visit on their way somewhere, or they would plan a vacation and stay with us for a few days. We had a large dining room table that accommodated several guests at various meals; of course, there was a kids’ table as well. My grandmother, Minnie, whom we called Nannie, would make the best chopped liver and that is when I learned to like it. To this day, all others are judged by hers.

Leon Schlosburg (wife Trixie) was our lay rabbi when I was little. Sometimes we would meet at one of Camden’s restaurants after services, and on a couple of occasions congregation members gathered to celebrate Hanukkah together; I remember spinning the dreidel with the other children. After Leon died, my dad, Bernie Baum, became the temple’s lay leader and conducted services for many years. When he and my mom moved to Myrtle Beach in the late 1980s, Jay Tanzer (wife Rita) led services. I remember Jay would also give a thoughtful and informational “sermon.” I always made it a point to return to Temple Beth El for High Holiday services. I still do.

When I was growing up in Camden there were maybe 20 Jewish families who belonged to Temple Beth El—down from around 100 families in 1927. Our house was right next door to the temple, which, by the way, used to be St. Mary’s Catholic Church, built in 1903. I remember going to temple as a young girl for Rosh Hashanah and Yom Kippur. There would always be a visiting, retired rabbi to conduct the services. Eventually, my father, Bernie Baum, took over leading the prayers for the holidays. My dad was not a rabbi; he owned Fox Pawn Shop, which was on Broad Street in the heart of downtown Camden. After he and my mother moved out of Camden, Jay Tanzer served as lay leader and he continued in that role for a number of years. Then my younger brother, Garry, took over, and he leads services twice a year for Rosh Hashanah and Yom Kippur. I still go home with my family for Rosh Hashanah.

My siblings and I went to Sunday school classes in Sumter at Temple Sinai. I remember my sister, Cheryl, driving us there every Sunday and how I never wanted to go. My older brother, Harry, had a bar mitzvah at Temple Sinai, and Cheryl and my younger brother, Garry, and I were confirmed there.

At home my family celebrated Rosh Hashanah, Yom Kippur, Passover, and Hanukkah, but I don’t remember having a Shabbat meal on Fridays or lighting Shabbat candles as a child. The first time I lit Shabbat candles, we were having a meal with my husband’s parents, Susan and Isadore Lourie. I remember thinking how special that felt and tried to do it often with my children when they were young.

I loved growing up in a small southern town and being Jewish was just that. I was Jewish and my friends were not, but that was okay. Life in Camden was good.

In school, I gave my friends cards and presents at Christmastime. There was no one to give Hanukkah cards to and my schools did not recognize Hanukkah as a holiday. We never had a tree to put our presents under like my friends whose families celebrated Christmas.

The sanctuary at Temple Beth El has not changed much. We do have air conditioning and heat now. Before that, we had large fans to cool us off. We have an annex in the back of the temple where the children—when there were enough for a class—went to Sunday school. My classmates learned more than I did about our Jewish heritage. I never learned much. Our class, which consisted of me, my brother Harr 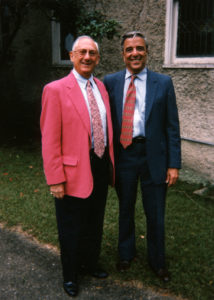 y, and the Schreiber and Karesh kids, was very small—about eight altogether—so my family sent us to Temple Sinai in Sumter for Sunday school.

In the 1960s and early ’70s, our temple had a nice crowd of about 40 people. Now we have only about ten families. We open up only four times a year for evening and day services on Rosh Hashanah and Yom Kippur.

My father, Bernie Baum, became our rabbi after Leon Schlosburg died. Now my brother Garry Baum leads our services and we have different people read from the Torah. A member takes the Torah home after services to keep it safe.

It was not hard living in Camden with such a small Jewish community. That’s all I know. I still live in Camden and I love it. Opening the temple for our holidays is very exciting. Now we have families coming from large cities to celebrate with us. They say it’s because we are small and they would rather come to a small temple instead of one of the larger ones.

During the 1960s I remember having Temple Beth El next door to the house where I grew up in Camden. That was good about 14 days a year, because those were days when the congregation gathered for services. Temple was very formal, but also—little did I know at the time—very English. Hebrew was never spoken, except for the Sh’ma and the Bar’chu, which were recited from memory, not read. We had a rabbi from Sumter come during the school year once a month, on Sunday afternoons, to lead Shabbat services. During the High Holidays, the president of the congregation led the services—that is, the part in English. We would take out the Torah but never open it. As a child all I remember was being told to be quiet.

Sunday school meant going to Sumter every week—a 70-mile round trip. At the beginning, a high school student, Steve Zagoria, was hired to drive us. When he graduated it required an unhappy parent. Then three of us—David Karesh, Harry Kline, and me—had our bar mitzvah. We became the Hebrew experts. Even if we said something wrong, who knew?

Today the reality is the size of the congregation at Temple Beth El continues to shrink. I remember three generations of the Baum family—our grandparents Minnie T. Baum and Morris and Cille Briskin; Minnie’s sisters, Rose Israel and Augusta Simons; Uncle Norman Baum; and my parents and siblings—taking up the entire right side of the temple, while the rest of the congregation was on the left. Many of us have moved away. Today, we have fewer than ten dues-paying families. Once we invited some friends of mine from a local Baptist church, who were interested in attending a service, and they outnumbered the Jewish people.

My brother, Garry, is in charge of services. Without him and Barbara Freed James, who is temple secretary and treasurer, we would not exist. I hope more Jewish people come to Camden so we can keep the temple alive for many years to come. It would be a shame for it to close.